Andros is the gem of the Cyclades, it has a distinctive beauty, different to any other Cycladic island and to the islands of the Aegean Sea.

If the ideal holiday combination for you is classic Cycladic architecture and rich vegetation then we have the perfect solution for you.

Although not as famous as the rest of the Cyclades, Andros has the opportunity to offer you just that, the most incredible golden beaches with deep blue waters plus endless greenery with the cleanest atmosphere.

Andros or also called Hora is located on a promontory between two sandy beaches while at the cape you will be able to find a rocky islet with the ruins of the Venetian Castro (Castle). Chora combines Cycladic with neoclassical architecture while great examples of the first can be seen in narrow streets with snow-white houses and the second in squares with luxurious houses.

Since the island has a long maritime tradition, you should definitely visit the Maritime Museum where nearby are the Monument to the Unknown Sailor and the Nautical Association. Chora also houses the Archaeological Museum and the Museum of Contemporary Art. There are Byzantine churches, among which clearly stand out ‘’Palatiani’’ of the 13th century. 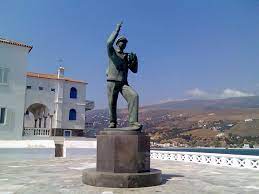 We also recommend visiting the Archaeological Museum, where monuments related to the geometric, classical, Hellenistic, Roman and Byzantine eras are exhibited. Another must-see is the Museum of Modern Art, as well as the Maritime Museum with a rich collection of ship models and equipment, as well as photographic materials.

One of the most striking sights of Andros is the 7-meter Turlitis lighthouse, built in 1887 on a cliff in the middle of the sea. Combined with the rock, the height of the lighthouse is 36 meters and it is the only lighthouse built in the sea. It was badly damaged by German bombing in 1943, although in 1950, a new one was built on the ruins of the old lighthouse and in 1994, the Turlitis lighthouse was completely restored to its original form. 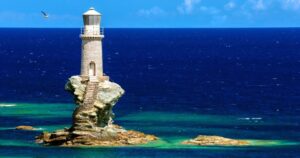 If you too have a weakness for sweets and desserts then do not miss the opportunity of tasting “Syropiasta” (sweets in syrup) and of course their jam. Jam “Karidaki” (made from local walnuts), “Tilichto Nerantzaki” (Pomeranets), “Triandafilo” or “Rhodozachari” (jam made from rose petals) and cherry jam are very popular. It is worth trying the jam made from Pabiloni, a fragrant citrus fruit that grows exclusively on the island of Andros.

As for the island’s most popular beaches, make sure to visit Batsi and Ormos if you prefer relative tranquility and solitude. Its large bay with a long modern esplanade is isolated from the rest of Andros by a mountain range, so the beaches are cleaner and wider. Other great options are located in the north of the bay, as the beach of Grias to Pidima, Neiborio, Paraporti, Peza or Vitali.

Speaking of lush vegetation, we could not fail to mention the springs located in Menites, where water flows from the marble jaws of lions. Situated in a traditional village nestled between walnut and plane trees, it is considered as one of the greenest settlements of the island while its name comes from the word “amoenitas,” which means “cute delightful spot.”

Ferry Tickets from Rafina to Andros

Book your ferry tickets with Golden Star Ferries from Rafina to Andros in just 1 hour and 55 minutes by SuperFerry.

Also for the “eternal fans” of Mykonos there is the solution: The route Andros – Mykonos in just 2 hours and 20 minutes!

So, what are you waiting for? Start planning your dream vacation and puck up your suitcase at last!