Ios is this small island in the Cyclades,in the middle of the Aegean Sea, that could very well be described as α real-life treasure and a small sailing expedition will do much more than convince you of this.

You may be in doubt how such a small destination like Ios has everything you wish for this long-awaited trip, but we are here to prove you wrong.

It is not unjustly called the island of youth, active nightlife, ravishing sandy beaches, flaming sunsets and new adventures.

The main part of the island is Chora, located on a hill where the decoration of houses is arresting as the combination of white facades and bright details of stairs, frames, shutters, painted in bright colors create a magical image. The smell of the flowers on the island’s narrow streets are constantly fragrant and as we all know nothing is more memorable than a smell.

Perhaps the most interesting attraction in Ios are the windmills, which continue to operate despite their decent age. There are 12 traditional windmills, in the past they were used to grind barley and wheat for bread making. Only three of them which are arranged in two rows on either side of the hill overlooking Chora, have been repaired. 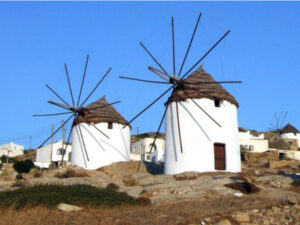 The island’s picturesque port is called Yalos where there are well supplied beaches, that you can borrow equipment for fishing or spearfishing, as well as a boat for rent. It is one of the safest and most windless ports in the Aegean Sea, which makes sailing in any of its 34 beaches an incredible experience. Pikri Nero Beach is accessible only by boat and offers the opportunity for a relaxing break in its sapphire waters and golden beach, as well as a serene tan under the Mediterranean sun.

Another great destination, is Agia Theodora which is located in the northeastern part of the island. There, in addition to a great dive, you can go to the oldest medieval church of the entire island, built in the middle of the 16th century.

It is said that this was the island where Homer was buried, whose grave can be found in the ruins of the Plakotos area. Other attractions include the Archaeological Museum, the Museum of Contemporary Art in Kolitsani and the outdoor amphitheater.

In the capital, it is worth seeing the snow-white, exquisite church of St. Irene, which was built next to the port and in the city of Agia Aikaterini respectively, the church of St. Catherine, the patroness of the island.

In terms of the beaches you should visit, at the top of the list is Magganari, located in the southern part of Ios, it is considered a paradise on earth and has even been awarded with the Blue Flag for its turquoise waters and it is ideal for snorkeling. Other great options are Kalamas, Plakes, Agia Theodori (there is also a camping site) and Psathi, which can be easily reached. 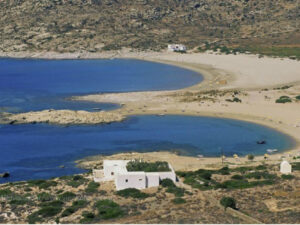 Of course, you have to try the local delicacies as Ios is renowned for its cheeses, as “scotiri”, a sour cheese made in a local creamery using sheep’s or goat’s milk! It goes well with Ios’s popular tsimetia (pumpkin flowers stuffed with rice) and a glass of local wine.

Obviously saving the best for last, there is no other place in the world where you could witness the breathtaking view of the sunset than Ios. The combination of the panoramic view, Cycladic architecture, and clear blue sky make the most unique experience.

You may not be the romantic type, but having seen the sunset from a place like that will change you for a lifetime.

Ferry Tickets from Rafina to Ios

Book your ferry tickets with Golden Star Ferries from Rafina to Ios in just 4 hours and 35 minutes by SuperExpress.

Also for the “eternal fans” of Santorini there is the solution: The route Ios – Santorini in just 40 minutes!

So, what are you waiting for? Ios is so mesmerizing that will certainly steal the first place in your heart!