In case you are in a dilemma which island of the Cyclades to visit this year, the answer is right in front of your eyes. Paros is one of the most famous Greek islands in the Aegean that belongs to the Cycladic group.

Fabulous beaches, picturesque architecture, buzzing nightlife and to put the matter in a nutshell, everything you require for the perfect vacation.

The island was in the hands of the Cretans when the Ionians arrived around 1100 BC. from the mainland of Greece. After initial defeats, the Ionians subdued the island and destroyed the Cretan civilization. However, archaeological discoveries have shown the extent to which Paros developed during the Minoan period. A little later, around 1000 BC, a handful of Arcadians arrived on the island under a leader known as Paros. The influence of the Arcadians seems to have been strong enough for the former Cretan colony to change its name to Paros after the Arcadian leader.

When you arrive in Paros, visit the most the most picturesque place, a city called Naoussa. It is easy to spot near the white houses and the large, red-domed church outside the village. Located on the north side of the island, there is a wide variety of fish restaurants, lounge bars and cafes. Local flavors will leave even the most demanding palates satisfied. After all, is there a better way to get to know another culture than trying their cuisine?

If you want to discover more of the island’s hidden treasures, just a few meters from the island’s main port called Parikia, is the Monastery of Panagia Ekatodapiliani. It is one of the best-preserved paleo Christian monuments in Greece where according to legend, the original church was built by Saint Constantine, the first Emperor of Constantinople, after an offering to his mother, Saint Helena. The name Ekatodapiliani means the Church with One Hundred Doors. According to tradition, the church has 99 doors and the secret door will open when the Church of Agia Sophia in Constantinople becomes Orthodox again. It is celebrated on August 15th with a large religious festival. 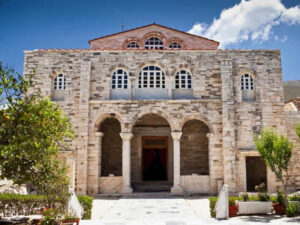 In ancient times, the island of Paros was famous for its fine marble, which was used in statues and temples. In addition to that, an old and partially ruined Venetian castle still stands aloof from the North Entrance of Naussa harbor which was erected in the 15th century and most of it still stands in the lively yet magnificent little harbor.

Needless to say, that a visit to Paros is incomplete without a visit to the bewitching Frankish Castle which is one of the most enduring monuments on the island. Built in the 1200s by the Venetian Duke of Naxos Markos Sanoudos who decided to build the castle of Parikia, with marble from the ancient Greek temples. Scholars believe the castle was built from the remains of an assortment of ancient sanctuaries that were scattered across Paros. The Frankish castle stands out for its magnificent architecture and intricate stonework, which acts as a silent testament to the island’s rich history. The elongated tower brings together all the elements of a 4th century tent-roofed building, built during the Franks.

Of course, apart from the rich history and the sights of the island, we could not fail to mention its dazzling and well-organized beaches. If you’re into water activities, be sure to visit Golden Beach, New Golden Beach, Kolimbithres and Santa Maria are some of the most impressive one’s, where you could do scuba-diving, spinnaker flying or even jet-surfing. Of course, the beaches on the traditional villages of Naoussa, Parikia, Lefkes and Marpissa are also worth visiting as they usually are less crowded and noisy. 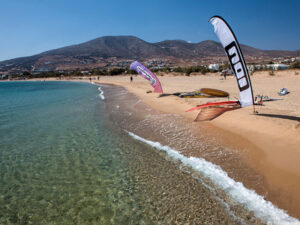 Ferry Tickets from Rafina to Paros

Book your ferry tickets with Golden Star Ferries from Rafina to Paros in 3 hours and 25 minutes by SuperExpress.

Also for the “eternal fans” of Santorini there is the solution: The route Paros – Santorini in just 1 hour and 50 minutes!

So, is there a question as to why you should visit Paros?