It is filled with many attractive beaches, lots of natural beauty and sacred aura. It is considered to be the third largest island of the Cyclades and is located near Mykonos and Andros.

Greece as a country has countless magical islands to visit although, none has such a strong religious character as the island of Tinos.

This little gem has been deprived of mass tourism compared to the rest of the Cycladic islands, which many consider to be the protection of the Virgin Mary, but is known throughout the Orthodox world as a major pilgrimage site. With the ancient Venetian tradition, Tinos is often regarded as a miraculous place, since the discovery of Virgin Mary’s icon, which is believed to have healing powers in the Church of Panagia Evangelistria or the Church of the Annunciation of the Virgin, built in 1823. Since then, Tinos has seen thousands of pious pilgrims visit the virgin island, especially in August, for the feast of the Assumption of the Virgin, where thousands of visitors crawl into the church to pray for a miracle or blessing. 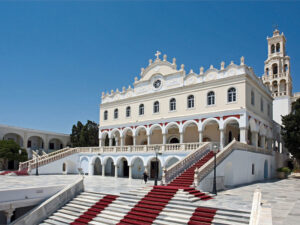 In addition to the majestic Renaissance church, the island is home to over 700 churches and chapels (more than the Vatican), some of which are Catholic. Why so many churches you ask? Well, it’s very simple.

While many parish churches were built during the Byzantine era, Tinos boasted a special agreement with the Ottoman authorities when the Venetians transferred land to them. The locals were free to build as many churches as they wanted, which was news at the time. Thus, a small chapel was built on each estate, as the ownership of the church was seen as a blessing for the locals. The tradition has been passed down over the years to this day. Another reason is that, like many other islands, Tinos has a large number of sailors and people are used to building several chapels dedicated to the patron saint of sailors. As a rule, today it is not uncommon to find a church or chapel in the forest, or in a gorge.

Besides the incredible number of churches, the island boasts a complex of about 40 villages that have retained their authentic charm and beauty, and are also famous for their countless blue houses. Crafted and intricately designed, this is another vestige of the island’s Venetian past.

Do not miss the chance of visiting the island’s marvelous beaches such as Agios Ioannis with its crystal-clear waters, Agios Sostis with its various entertainment facilities and Kolibithra with the picturesque bay. Let’s not forget the most secluded and exotic one which would be Pachia Ammos and of course the most isolated one called Livada, perfect for a little quite alone time. 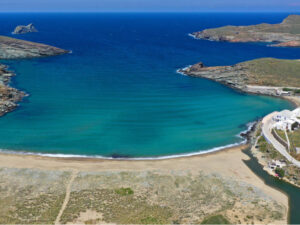 Ferry Tickets from Rafina to Tinos

Book your ferry tickets with  Golden Star Ferries  from Rafina to Tinos in 3 hours and 45 minutes by SuperFerry and in just 1 hour and 55 minutes with SuperExpress.

Also for the “eternal fans” of Mykonos there is the solution: The route Tinos –  Mykonos in just 35 minutes!

Whatever the ideal destination is for you, Tinos will definitely make it on the top of your list!